Workshop: That’s how you make an exit 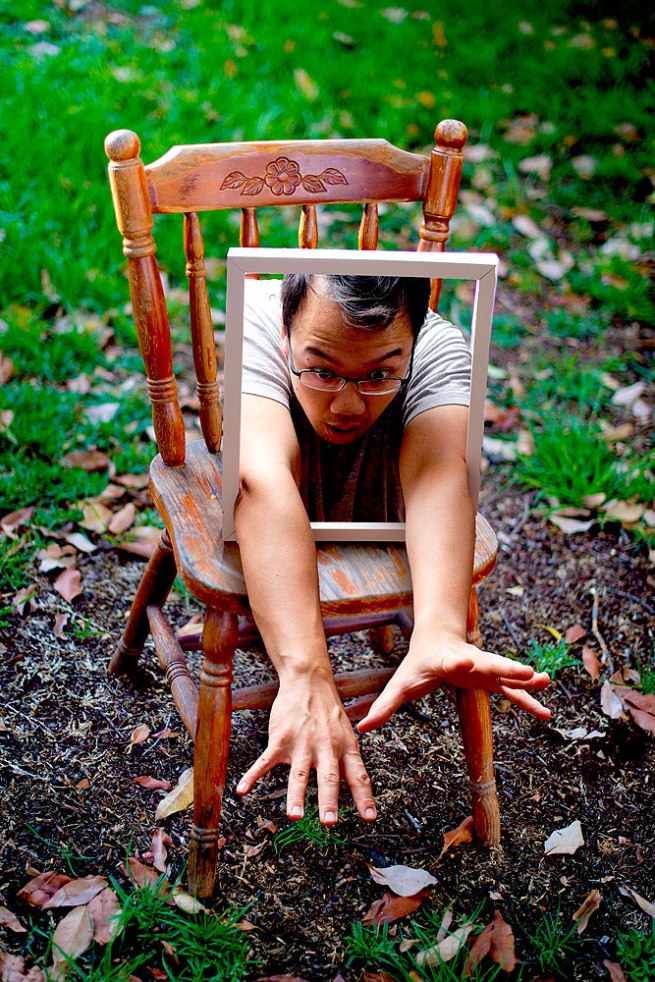 I took this photo towards the end of March this year. I was inspired by the idea of the old-style illusionists and con-artists who perform magic tricks as part of a travelling circus, riding shoulder-to-shoulder with snake charmers, sword swallowers, bearded ladies, and the like. Samantha and I had just been to see Oz the Great and Powerful, which in many ways reminded me of an old Chris Nolan film that I count as a favourite: The Prestige.

Because of The Prestige, what began as an idea to photograph my hand emerging from the opening of an inverted top hat evolved into something I felt was a little more shocking and unbelievable: my entire person squeezing through that tiny space. I imagined it would all take place on top of a little wooden stool, just like in the magic tricks.

There was just one little hitch. Well two, actually: I didn’t have a top hat, and I didn’t have a wooden stool. So I improvised. The wooden chair, being so old and weathered, did the job. The white picture frame, with its backing board and glass removed, turned out to be pretty crucial. In any case, here’s how I did it… 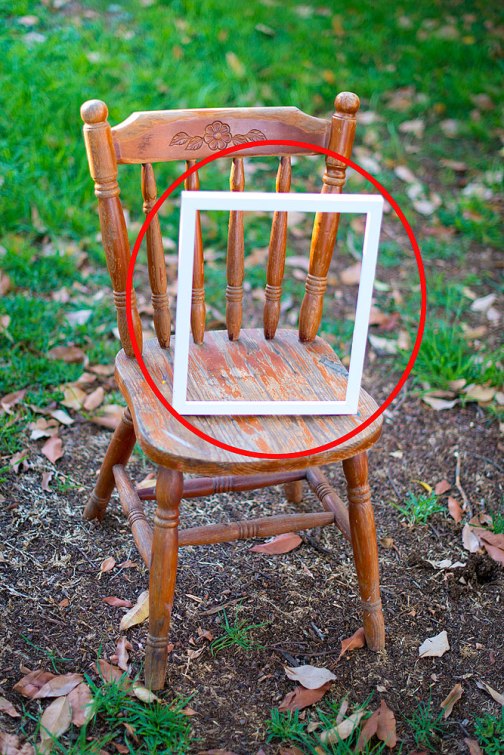 Getting a reference shot

Step 1: Get a good reference shot (The Pledge)

It’s just a shot of a picture frame sitting on a wooden chair. The clean, plain, geometric shape of the picture frame (circled in red) is everything. After taking this shot, I noted the position of the sun as it would inform everything I needed to do in the next step in regards to lighting. The composition of this photo is deliberate, too – there’s just enough space for my body to fit in there, but it’s not so tight so that any of the surrounding context is lost.

This is the unglamorous part

Step 2: Take a photo that matches the reference (The Turn)

So, remembering that the exact look and placement of the picture frame in The Pledge is key, I took a picture of myself pretending to climb through it (pictured left). The flash was placed directly behind me to simulate the lighting and shadows if I was in the reference environment.

Some of you will be quick to note that I’m not shooting in a studio environment, which is entirely correct. I didn’t have time. But, when you’re shooting at f/16, everything’s going to come up razor-sharp – and that’s all you need when you’re deep-etching yourself out (pictured right). But truthfully, if you look closely at the right-hand side of the frame, you’ll see that my etching job isn’t actually that clean – the nappy bin in the background is too close a shade of white to the picture frame. It doesn’t matter a great deal: since I’m using the frame as a reference, I can just blend the two (the old one and the new one) together.

Make it an absolute match with the Transform functions

Okay now, here’s the slightly tricky part: I took those photos in the space of 15 minutes, so it’s crazy to think there’s any way I could match the exact angle of view of The Pledge. It you take a second look, it’s off by a few degrees and tilted slightly in the wrong direction. This is why I stressed earlier that the simple shape of the picture frame is so important: in Photoshop, this is easy to fix. Just select the area, click Edit > Transform, and you can start skewing the shape of the rectangle until it looks like an absolute match with what appears in The Pledge.

Ideally, I couldn’t make too drastic a transformation to the image because my face would become unrecognisable. Using a predictable geometric shape like a rectangle (instead of a hat) went a long way towards minimising those changes.

Take The Turn and lay it over The Pledge. To further sell it, I erased the portions within the picture frame above my shoulders in The Turn so that you can see through to The Pledge. I also added some shadows that would be cast by my arms in that environment.

Go back for more Workshops

2 thoughts on “Workshop: That’s how you make an exit”