I often get asked how to take a “proper” portrait. Not abstract selfies with warped angles, but the ones where everything looks like they’re in the proper proportions. There are several things involved (such as composition and lighting, but maybe another time), but the answer starts with the choice of lens.

In terms of looking accurate-to-life, my first choice of lens is usually the 50mm (on a full-frame sensor) because it most closely mimics what the human eye would see. However, for the sake of convenience or through force of habit or what-have-you, most people leave their cameras on the shortest possible focal length for every photo they take, which can be as short as 14mm or even less.

The truth is, it’s probably better to go in the complete opposite direction – 85mm, 100mm, 130mm and longer. But why bother with such large, heavy and unruly lenses?

I’ve compiled a little table that compares what a portrait looks like when taken at different focal lengths.

Change the way you look with your choice of lens

When you consider that a wide-angle lens can capture a near 180-degree field of view on an area the size of single sensor, and that a zoom lens captures a much narrower field of view on the same sensor, then what these lenses are actually doing is bending the light it receives to fit the sensor area.

Wide-angle lenses make things that are far away seem even further way in order to accommodate the wider field of view. That’s why rear vision mirrors on cars often warn that objects are closer than they appear. That’s why the pictures of me at 14mm, 24mm and (to a lesser degree) 35mm make my forehead and nose look more bulbous than usual, and my face a little fish-like with my ears pushed back.

Telescopic lenses, the ones with the longer focal length over 50mm, make distant objects look closer by compressing the space, making things look flatter. That’s why people always talk about television cameras adding five kilos – everything the lens is able to catch at the back of the face is being pushed to the front. It’s also a much more accurate representation of the real thing.

So, to answer the original question: if you want the people in your photos to look realistic, extend your lens to at least 50mm, or as far as it’ll go. Most people who shoot with a DSLR should already know most of this, but if you’ve only got a point-and-shoot, it’s a very easy way to smarten up the look of your photos.

Of course, that’s not to say everything needs to look realistic. I took this photo back in 2011 by taking advantage of how wide angle lenses work. 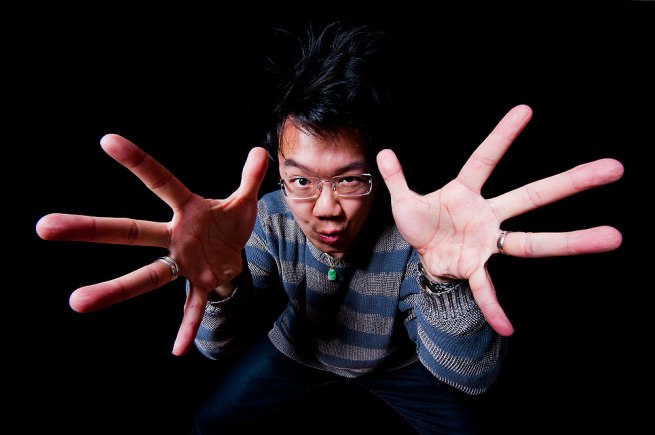 Go back for more Workshops

One thought on “Workshop: Portraiture – change the way you look”